skip to main | skip to sidebar

Ok folks, this blog will end here...
But it goes on with http://theworldofharmens.blogspot.com/.
See you there and thank you.
Posted by Harmens at 2:07 PM No comments:

Ok, after a long period of silence, and using a HTC HD2 and an Android Milestone, I finally stepped over to Windows Phone 7! Yes, now my main device will be the Samsung Omnia 7.
Stay tuned for more info.
Posted by Harmens at 2:23 PM No comments:

Yes, I finally did it! I bought a HTC Touch HD, a beast of a Windows Mobile device. But why?
I admit, I really like the Nokia 5800 Musci Express, which I've been using for the past three months, day and night. But slowly but surely I began to miss the WM operating system, which is so tweakable, and so easy to use (for me). So, when the Youch Diamond 2 was released, I began to think about going back to WM. The TD2 is a very good device, with everything on board to keep you happy for a long time. But, when I did take a good look at the device, I decided it wasn't that different from a TD, or, for that matter, the Nokia 5800.
Then, on a wednesday evening, I went to the Mediamarkt, and could compare several devices, like the Touch HD, the Diamond 2 and the Touch Cruise 2. I was immediately blown away by the screen of the Touch HD! Wow. And the TF3D performed very, very good.
But to be honest, the TD2 was also a very nice device. Still, I really liked the Touch HD with its 3,8" 800x4800 screen. The decision was made...
The next day I ordered it for 509 euro and got it on friday the 24th of april. 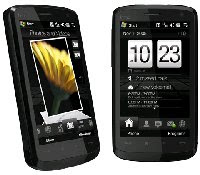 First impressions
- Again, the screen blows you away: gorgious!
- the device feel very sturdy, no creeking. That makes a world of differences with the Nokia 5800, which has a plastic feel and poor build quality.
- TF3D runs smoothly, now you can turn off or replace the tabs (I removed the stocks tab, don't need that).
- I read about issues with TomTom 6, that would not work. So I installed Route 66 Navigator 7 (yes, quite outdated) and it worked like a charm. So I have navigation throughout Europe on my HD.
Note: Nokia Maps is free and covers about the whole world. I installed it locally, so didn't need an online connection to use the maps. But... I really did not like the license policy of Nokia. I tried navigation for a month, it was ok, but I think the costs for navigation are way to high. For 90 or 100 euros I can buy navigation across Europe which I can use for many years. No map updates, but no navigation fees too.
- all the software I installed (memmaid, total commander. eWallet, listpro etc) works without any problems.
- battery duration cannot match that of the Nokia 5800, but is not as bad as the original battery of the Diamond. I think you can compare it to the extended battery of the TD. You can make it through one day, that's all I'm asking for.
- haptic feedback. I like it on the Nokia, I like it on the HD.
- bigger screen = bigger icons and list items = finger friendly.
- MicroSD instead of fixed 4GB (on TD), and, like the Nokia, it comes with an 8GB MicroSD card.
- better on/off button than the TD, but I really miss the on/off switch of the Nokia!
- 3.5mm headphone jack. No more ExtUSB hassle. Just plugin your favorite headphone and you're done.
- 5MP camera. No flash. Nice pictures, but then again: if you want quality pictures, use a real digital camera. No dedicated shutter button, which is bad. But tap on the screen to specify where the focus must be set.
- speaker: much louder than on the TD, but not as loud as on the Nokia.
Posted by Harmens at 1:14 PM 1 comment:

It seems that the first serie of Nokia 5800 was flawed with a bad earspeaker. The people from MobileReview have discovered this issue, read here.
Lucky though, the new generation (from end january) does not have this issue, plus, Nokia admits the problem. So, if you have an issue with your 5800, you can go to a Nokia Care Point and they will repair it cost free. This also applies to the so called 'grey import'.
My Nokia 5800 was legally bought in the Netherlands, but it turns out, it was imported from Germany. This is 'grey import'. It really doesn't matter though, because the device language is 'Dutch' and I have full warranty by Dutch law. So if I encounter this issue, or any other problem, I will have it fixed under warranty.
Posted by Harmens at 1:23 PM No comments: